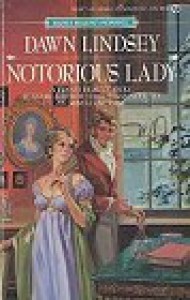 When Marcus, the Earl of Roxbury learns from his sister that his nephew Julien is s set on marrying a certain Diana Mayhew. Not only is as good as penniless but is also the niece of a retired notorious actress .This clearly can't be permitted so he sets out to free Julien from their grasp.Initially mistaking miss Philippa Mathew for her younger sister and declaring he won't allow it.

Roxbury and Philippa are firmly set against each other.

Philippa has been responsible for her three younger siblings ever since the passing of their father and only an invitation by her aunt-in-law Bella to come live at her home kept them from being separated. Maybe Bella is not all the thing but she has a good heart and they have become a family.

The plot was similar to True Lady by Joan Smith.but read like a slightly more serious version. Thats not to say "Notorious Lady" hard reading by any means.But the reasons behind the two characters motivations just felt weightier,

Now there is something I have to adress. There was a scene in this book that had me mentally go "thats seriously not cool Roxbury" (he grabs her wrist and bruises her )I dont want to make light of it but on the other hand its not completely unusual in this genre that is no stranger to "punishing kisses" I have read much worse and does lead up to a scene that was very emotional and showed him to be genuinely sorry.

I just have to say that I have no idea who the blondes on the cover are as its expressely stated that both the hero and heroine have dark hair.

A good new author in the traditional regency genre and I will certainly read more of Dawn Lindseys books :) (less)