Over her head by Nora Fleischer 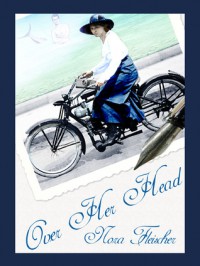 Frances Schmidt is a young woman graduate who has decided to write her thesis on mermaids. Getting hold of source material proves to be tricky Being the only female in her class she feels the pressure to be the best she can be and at the same time keep a low-profile so when she gets a lead about a gentleman living in Maine who collects books about mermaid lore and she decides to travel to there to convince him to let her look at his library. Being a very private man Garett has already turned away others from his library. But Frances has a secret weapon. Her homemade cookies. This breaks the ice and Garett gives in and invites her inside.

She is amazed at the interior and finds that the rumors about his collection of books is true.But she also finds it a peculiar that someone who purchased a house right by the beach would avoid going near the ocean. Garett is in fact a merman and if he cant swim in the ocean he will become deathly Ill. He lives in fear of anyone finding out his fishy secret and even if he starts to have feelings for Frances he could never marry her as he doesnt want to pass on his affliction as he thinks of it. I love books featuring mermaids I really do, thats why its such a pity so many of them end up a disappointments (skeevy or just badly written) or its the same old plot -mermaid falls in love with human and gives up the ocean to be with him. Its not a bad story precisely but the thing is to borrow a quote from Ariel I want more and more in this case is more underwateriness

( Frances is part of the breed of New woman as they were called in the Edwardian era she left her small town and big family to study at university.She has always been told she is plain so when she makes a friend in Garett she is just happy to have someone to talk to.Someone who can appreciate her finer qualities. Garrett had two sides to him not only when it comes to his human self and his mermaid self but he wants to have companionship but at the same time he is afraid of people shunning him if they ever found out his secret.When he was just a baby was left on the doorstep of a lady who took him in and raised him,but when his "affliction" was discovered made him feel like he was some kind of monster. Its a simple sweet story but there is most of the angst comes from Garrett as he has a hard time reconciling his human side and his merman side.

He had decided long ago that celibacy was the only honorable path for a creature like him. He could not risk his taint, his disease being transmitted to the next generation. He would not bring another monster into the world. He dove into the water. As always, with the pleasure of the change, he felt his melancholy lift. Down here he could not understand why the dry version of himself loathed his body. He wasn't repellent. He was a strong, healthy merman. His scales were a lovely blue, the color of his eyes. Frances would like him if she saw him, just as much as he liked her.

Its ingenious (be it deliberate or not)to put the setting to the Edwardian era as thats about the same mermaids were coming back in popularity in art,fashion and the new medium - film I really loved the bit about Thoreau and the mermaid. It made me grin. If you are the kind of person who expects to have straight answers to find out where Garett came from (and how his kiss could turn Frances into a mermaid) then youBut I didnt mind it would have been nice to learn the answers but in the end its not really important. If the author decided to write a sequel where those things are answered I for one wouldnt mind,as I would love to spend more time with Frances and Garett. But as it is "In over her head" is a delightful little tale find of a book a bit of historical fantasy for the romance and mermaid (and merman) lovers out there. If you enjoyed this book: Miss Landon and Aubranel by Charlotte English