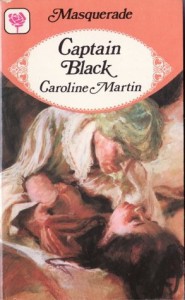 Duty had surrounded Deborah Halsey since infancy. It had been the motivating force of her Puritan upbringing, the principle that had guided her rigidly strict parents in molding their child.

Now Deborah had grown into a dutiful but lonely young woman - with an arranged marriage and a whole host of new duties ahead of her.

Suddenly, on an impulse stronger than any she had ever known, stronger even than her sense of duty, Deborah rebelled

In 17th Century Englad some years after the death of Cromwell Deborah is a young orphaned woman who lives with her dour puritan aunt and uncle.They have already betrothed her to a distant relative Edward Biddulph as to keep her fortune in the family.

One evening after traveling home by coach from a visit to her fiancee she and her maid Nan are set upon by the highwayman who calls himself Captain Black.Deborah is taken captive and held for ransom

This review is short for a reason.

I cant say the romance as its called held my attention or even made Believe it was anything else than an onesided infatuation from Deborahs side.That is best case scenario as some might even call it Stockholm syndrome

Actually for the most part they are not even in contact wich makes their reunion and proclaiming their love seem utter ridicilous.

This book was reissued on Kindle