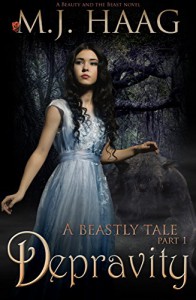 Benella lives with her father Bernard and her two sisters Bryn and Blye in a small village.Her father is the local schoolmaster wich pays just barely to keep them from starving even with the money Blye brings home as an assistant for the village seamstress.

To supplement this Benella forages near the grounds of an abandoned estate that is kept under a spell and guarded by a fearsome beast wich is best avoided.But making ends meet is not her only problem as Benella also has to deal with avoiding the two sons of the blacksmith that constantly harass her and the ever more increasing lecherous intentions of the baker.

One day she overhears her sisters talking and realizes that her sisters has been hoarding money and resources from their father and herself forcing them to live in near poverty.

By the actions of her sisters and the sons of the blacksmith she is thrown into the presence of the beast more than one time and the beast demands she repay him.

Well...I had been willing to overlook some of the books flaws and give it at least an two star rating but that went out the door the more I read and the more I started to cringe.

For one thing its jarring when the suddenly formal dialogue is broken with more modern language but much more than all of that is all the sexual situations that I didnt expect nor particulary care for and I dont It was of the kind that made me feel increasingly uncomfortable.

Its pretty much erotica.

"If a man’s energies are pent and not released, he will become volatile, unpredictable. Tension will creep into his body and often stay there even after the energies are eventually released. If you touch a man, no matter how innocent the touch, watch for the signs," Aryana warned. "

Be sure your touch is only releasing tension and not building pent energies." Fascinated, I nodded my understanding. It did sound a bit like the beast. Even after his encounter with the wood nymph and he’d released his energies, he had still kept his tension. The sisters were right about the dangers. I would never attempt anything like what I’d just learned on the beast. I feared his response.

Did I mention this book is labeled as YA? Am I being a prude or is this acceptable for YA?

I also kept wondering why the baker appeared to be such a powerful in the village and why the smiths wife was desperate enough to pay him in natura.I have always thought blacksmiths were in high demand and therefore better off since they learn to fix all sorts of things.

Her sisters were just horrible and It was very frustrating that Benella didnt confront them on their selfishness but this seems to have been a trait she inherited from her father as he is a very vague character.

Her father just seems so placid about the things that happens to Benella she comes home injured or someone broke into their home and attacked her all of this is met with polite interest and then he just tells her to clean herself up and stay away from the beasts estate. So there are two boys who are harrassing your daughter and your other daughters are keeping you in poverty.

Then, arriving home late and finding your bed empty..." He sighed. "I’m very relieved you weren’t forced into..." He shook his head unable to finish.

DO SOMETHING WILL YOU AND STOP BEING SO WISHY-WASHY

In the original fairytale the conflict comes from Beauty being forced to live with the Beast in his castle. Here our Beauty just ambles around without progressing the plot into its pretty much just filler to make it so and so many pages and voila its a book. and to find out the whole story you have to get the next part. I dont mind cliffhangers at the end of a book but what I dont like is when a book is just bait.

Is it ironic that that a book with so much ...ahem gratification on its pages leaves one unsatisfied?